Bullet holes peppering the aluminum entrance to the Southern Café East hint at the sobering story of distress tormenting the Mt. Pleasant neighborhood. Owner and Executive Chef Tony Fortner, who has invested in the community only to find his opportunity for success stymied by Covid-19, currently finds himself living a nightmare that’s far from finished.

Identifying a need on Cleveland’s east side for a soul-food cuisine restaurant similar to the popular Southern Café West that he’s co-owned and operated in Lakewood for five years, Fortner leased and completely refurbished a former auto parts store at East 139th and Kinsman Road.  Without any advertising or as much as a poster, the café opened on March 1st to great fanfare. On a typical night, the tables were packed, and the long line to purchase his selection of southern dishes wrapped throughout the now-empty store.

On Monday, March 9th, an aura of anguish descended. When Fortner and his staff arrived that morning to do inventory, they were greeted by the sight of a 22-year-old man’s body in front of the gas station across the street, his head, face and chest riddled with bullets. “It was very traumatic for my wife,” Fortner recalls. “She hasn’t been back since. She stays at the Lakewood restaurant.”

Then, on March 17th, Ohio Governor Mike DeWine’s shelter-in-place announcement closed the doors of his thriving new restaurant due to guidelines to halt the spread of Covid-19. The order also closed the Cuyahoga County building across the street that housed 300+ employees, many of whom had become regular customers.

Fortner went from employing 11 people to three. He was forced to convert to a takeout restaurant, which caused his business to plummet to 25 percent of what it was. His rent and utility bills, however, remain the same.

“I’m trying to keep the doors open, because I know eventually we’re going to come out of Covid,” says Fortner, a Cleveland Heights High School graduate whose glittering resume includes chef or part-ownership roles at some of the city’s hottest restaurants, from Johnny’s Downtown to Zanzibar. “Everybody knows it ain’t forever, but so many businesses are falling by the wayside, man, it’s crazy.” 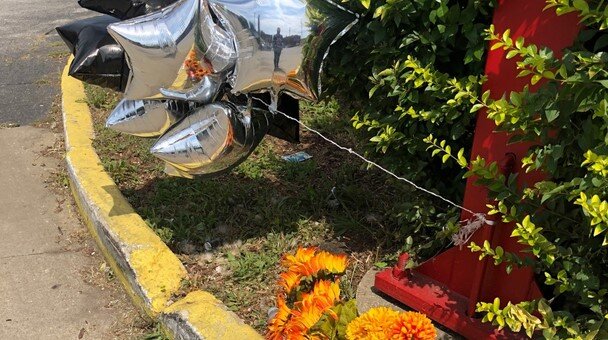 A memorial for one of the victims killed at the gas station at E. 139th/Kinsman

Fighting crime in “the Old West”

The “avalanche” has only gotten worse. Balloons and flowers on the gas station tree lawn memorialize the first and a second murder on May 7th, and on August 14th another murder happened at the same location. When he could reopen his restaurant this summer, Fortner couldn’t even think about unveiling a patio for al fresco dining. No one in his right mind would sit outside in “the Old West,” as Nicholas Perry, executive director of Mt. Pleasant Now Development Corporation, calls it.

Located in the county building near the Southern Café, Perry and his staff found themselves running across Kinsman at 10 a.m. on March 9th to help the young man who had been shot to death; a second man had also been shot and was taken to University Hospitals. The shooter had stood on East 139th just outside the doors of Mt. Pleasant Now’s offices.

On the day in August when we met, the window in Perry’s office had been shattered in yet another shooting the night before. Doors of the once-completely-open public building are all locked, and visitors are funneled past security to a temperature-testing station inside the rear entrance.

Though Perry has worked closely with the 4th District Police Department to address the recent crime spree, his primary responsibility is to focus on economic development and help businesses in his community already grappling with the hurdles caused by the pandemic. Mt. Pleasant does not have any industrial companies. The majority are mom-and-pop small restaurant or retail businesses such as Southern Café and Whitmore’s Bar-B-Q on Kinsman or Henry’s Dry Cleaners on East 116th or CMB Soul Food and Two Cousins Beauty Supply Inc. on Union Avenue.

“The whole crisis brought to light what we already knew, which is the disconnect in the southeast quadrant of Cleveland with modern technology,” Perry observes. “We also noticed that a lot of the businesses are either first or second generation and don’t have the modern technology to even know about what’s going on with Covid-19 or about loans, grants or other resources available to them.”

When the pandemic first hit, a lot of the businesses weren’t sure whether they were supposed to shut down. Then they weren’t certain how the reopening was occurring in terms of how to implement social distancing or add plexiglass separators. Many didn’t understand how to apply for the Payroll Protection Program (PPP). Mt. Pleasant Now hosted a virtual meeting with a small group to provide guidance on what was happening and what programs were available to them. They have also helped fill out detailed grant application forms.

Cleveland’s Health Department worked with some but not all of the restaurants to guide them on how many employees they could have in the kitchen, how many customers in the restaurant, how many could work at the register and so forth. “There has been a lot of handholding, but we still have a lot of businesses really struggling,” says Angela Shute-Woodson, assistant director. “They’re just not seeing the same volume of business since this happened.”

According to Woodson, one of the biggest challenges with the digital divide is that small businesses do not have any online presence and operate as cash-only businesses without the ability to use cashless payment apps such as Google Pay, PayPal or Venmo. Because they couldn’t visit a website, customers of one closed retailer kept calling or driving past the store until they saw lights on to know if they had reopened.

This month, to lift some of its business constituents into the 21st century, Mt. Pleasant Now will host a series of internet and social media training sessions in conjunction with the Seeds of Literacy office across the hall from their offices. The goal is to make the companies more tech savvy and show them how to leverage Facebook and Instagram to advertise, for example, or use Constant Contact or Mailchimp programs to connect with customers. By taking orders online, Perry says, walkup businesses can cut down on the personal sales approach because these areas are hot zones for Covid and crime.

A new chamber of commerce

On a larger scale, Perry has led an initiative since he took over the agency three years ago to create a chamber of commerce for businesses in the southeast quadrant neighborhoods, including Buckeye, Lee Harvard, Mt. Pleasant, and Union Miles. “It will allow them to have access to some of the things that they weren’t able to have being by themselves,” he says. “We’re trying to create a little bit of synergy and organizational structure and knock down the silo approach where one neighborhood is pitted against another.”

The chamber will enable businesses to connect with and support each other by using their services, for example, hiring a local restaurant to cater a business meeting or training session.

Joseph Duffy, real estate development director for the Union Miles Development Corporation, has seen similar situations in his community and has been helping Perry organize the chamber of commerce initiative. “One of the challenges here that’s risen to the forefront during the crisis is the lack of digital literacy,” he says. “A lot of our mom-and-pop retail businesses have not been able to pivot to doing more online commerce because of the barriers to internet access and the lack of knowledge about creating and operating an online presence.”

In response, his organization has been sending out guides, resources and tips on how to make that leap. Some businesses in the Mt. Pleasant and Union Miles areas have applied for small grants where possible, but most have avoided applying for loans because they don’t want to carry any additional debt.

Also, federal government or city loan programs are designed to fit companies at a certain threshold of how they manage their business or keep their books, Duffy explains. Thus, businesses that run on cash or don’t keep their books organized in a way that’s compatible usually makes them ineligible. “In that sense, the neighborhoods that have already seen the largest financial challenge are the least helped by the programs that have been coming out in the crisis,” he says.

Cleveland’s economic development director David Ebersole corroborates Perry and Duffy’s observations that the hardest hit businesses have been those that relied on high amounts of foot traffic on a daily basis: restaurants, retail, hair care, etc. Some were able to adapt to a take-out based model during the closure; others were not.

“The impacts have fallen harder on smaller businesses with limited access to capital, especially small, minority-based businesses,” he says.

Rolled out on May 4th, Cleveland implemented its ReStart CLE Initiative as its strategic Covid-19 recovery plan. Additionally, Ebersole informs, the city has worked with multiple partners, including small business development centers, Cuyahoga County, Team NEO and Jobs Ohio, to provide other forms of business assistance.

In March, before the initiative was announced, Cleveland had provided for a deferral of payment and extension to all loans, with the exception of loans where the city had obligations to other entities, to help borrowers reduce their monthly expenses during the pandemic and closures.

To date, according to Ebersole’s offices, the following are the results of these programs: 87 loans have been processed and closed, with funds available to borrowers upon request; 55 payments that borrowers requested under the program have been processed; and the 87 loans processed in three months is roughly comparable to the approximately 100 recipients of financial assistance the city would have normally serve in a year.

Although they had a few “sticking points in getting the program started to process the amount of loans issued,” Ebersole feels that they identified and resolved several of the issues that caused delays. They recently approved and started processing an additional 115 loans. He adds that on August 8th, the US Economic Development Administration announced an award of almost $4 million to supplement Cleveland’s revolving loan fund and support lending for Covid-19 relief.

“The biggest challenge is also the hardest to fix: consumer behavior,” Ebersole concludes. “Until consumers regain confidence in the health situation to resume pre-pandemic behavior, many small businesses will struggle.”

For Chef Fortner and Southern Café East, time is running out. Covid-19 is not diminishing, and many believe there will be a second surge this fall. Job security remains tentative. The additional unemployment payment has ended. He is unable to apply for any loans or grants because his new restaurant has no tax documentation for one year of operation in Cleveland. Fall/early winter is the traditional slow season for restaurants. He will know by the end of the year whether or not he can remain open.

“Until people feel safe to come in and sit down and eat again, until those business offices and buildings around us open up again, until people get disposable income again, you’re going to see businesses like mine fall by the wayside,” he says. “I’ve seen a lot of ebbs and flows in my 40+ years of working in restaurants, but nothing like this.”